Radio Monash Malaysia | » Monster Hunter, what’s that?… or why the words “plate” and “ruby” have a special place in my heart.

Monster Hunter, what’s that?… or why the words “plate” and “ruby” have a special place in my heart.

Monster Hunter, what’s that?… or why the words “plate” and “ruby” have a special place in my heart.

Perhaps you’ve seen some people on campus playing on their handheld 3DS-es and what you saw on the screen didn’t look like Pokemon. Chances are, it was Monster Hunter Generations instead.

What is Monster Hunter?

Okay… so what *is* Monster Hunter?

Well, simply put, it’s a game where you go out and beat up a monster with your over-the-top weapons and cat-like assistants, and then use the parts of the monsters to go beat up the monster’s cousin… or something to that effect. In practice this makes the gameplay loop something like this:

Wow, that sounds rather mundane when I spell it out like this doesn’t it, well, luckily for us Monster Hunter players, it’s far more exciting than all that. The game is basically an action-RPG after all, but instead of experience points to level up, you only really level up your equipment, and of course…

Yeah, so the real reason why people love these games so much is mostly attributed to their difficulty. When it comes down to the wire, what separates a dead monster from a dead hunter is the players’ skill at the game. The game’s monsters come in 2 varieties, Small or Large. Small monsters are the pipsqueaks that hang around the environment and aren’t usually your targets, because the game’s usual targets are the Large ones, and each and every one is a boss fight if we compared them to other action games. That’s why player skill is so vital, it extends far beyond just how good you are at pressing the right buttons at the right time, but also to the various mechanics on display within the games. For example, veteran Hunters would be well aware that a Rathalos (the flagship monster of the first game, a big red wyvern thing that shoots fireballs), likes to attack you from the air by flying around, and that you can throw a flash bomb right at its face while its in midair and it’ll tumble down to the ground, incapacitated for a short while for you to wail on the poor, blind thing.

A Lance-Hunter bracing for a Rathalos charge. 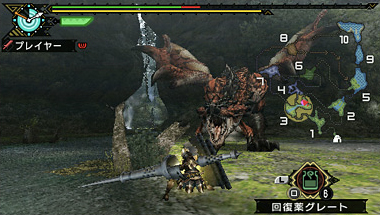 But in all seriousness, the game is brutally difficult for newcomers, because of the sheer complexity of the mechanics of these titles, coupled with the nearly universally terrible in-game tutorials, Capcom may make good games, but god help us they can’t teach you how to play them. Fortunately for us, the Internet is here to save the day and they are a plethora a useful resources online for new and old hunters alike to better their game. But for all the complexity of the games, there really is a lot of deep gameplay and decision making to be had, catering to all sorts of different playstyles.

For instance, did you know that in the latest game, Generations, every hunter has the option of using one or more of 14 different weapons, and even play as a cat buddy themselves. With each and every one playing completely differently, with their own movesets and special characteristics.

Let’s take a close look at them shall we?

The Monsters of Monster Hunter

Finally, if all of this hasn’t sold you on the idea of Monster Hunter, let’s not forget the stars of the show here: The monsters themselves! At this point in time, there are easily over a 100 Large Monsters (a.k.a. the boss monsters, the goal of most missions), with every new game they come and go, mostly for variety’s sake, but Monster Hunter Generations is a celebration of the best of Monster Hunter as a series, and brings together the largest repertoire of monsters of any Monster Hunter game, with favourites from all the previous titles and some additional ones to boot. They even introduced special variants of some Large Monsters which are extremely dangerous and serve as the endgame challenges for players.

A selection of various monsters from the Monster Hunter games.

Oh, and don’t worry, the monster variety is immense, for every dragon-like monster out there, you have a bear, a giant bunny, a mammoth, a bat-panther, an excavator in monster form, a raptor, a chameleon, a sand shark, an owl, a chimpanzee-aardvark and sooo many more!

So the next time you see someone playing Monster Hunter, do me favour and ask what weapons they play and how the hunt for Narga ‘Orbs’ and Rathalos ‘Rubies’ is going,. Godspeed and bless those poor bastards.

Next week on “The HotSeat”: “The Legend of Zelda: Majora’s Mask… or Why I’m scared of looking at the sky.”

“ArcticLyrae is a 3rd-year Monash University Malaysia undergraduate with great enthusiasm for all things related to gaming and its many forms. He is the Game Master of Monash Gaming Society and writes articles for Radio Monash Malaysia covering various gaming-related discussions in his weekly section, The HotSeat.”

Do you eat to live, or do you live to eat?

The Legend of Zelda: Majora's Mask... or Why I'm scared of looking at the sky